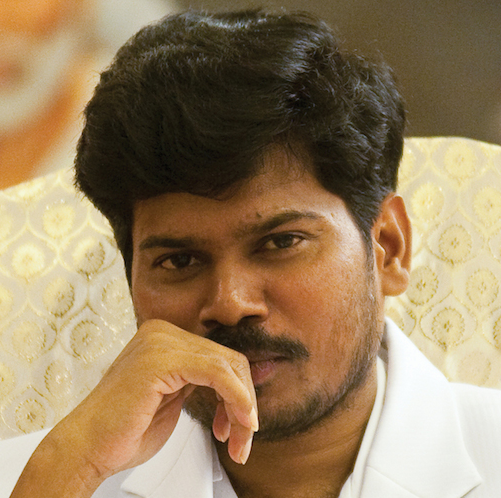 Sri Kaleshwar was born on January 8,1973 in a small village in Andhra Pradesh, southern India. As a child, there were many divine occurrences around him. Kaleshwar.’s spiritual awakening, what he calls his ‘enlightenment day,.’ took place when he was 14 years old. It was then that Shirdi Baba, one of India.’s most revered saints who had died in 1918, miraculously appeared to him when he was studying in an abandoned temple. Soon after, Kaleshwar began demonstrating miraculous healing abilities. Shirdi Baba had opened his energy channels to the Divine. Kaleshwar.’s true dharma, his spiritual work, then began to unfold.

For the next years, he practiced intense spiritual disciplines under Shirdi Baba.’s guidance. He was guided to palm leaf manuscripts written by saints from over the last few thousand years. He voraciously studied the sacred information written in the ancient manuscripts, and practiced the formulas of mantras and yantras they revealed. The goal of these remarkable formulas was to awaken miraculous abilities in the soul and have a direct experience of God.–.–it was the ancient technology of enlightenment. His spiritual research completely took over his life. Instead of studying botany, he studied the manuscripts. Instead of attending biology class, he meditated and practiced the formulas revealed in the manuscripts.

He traveled across India, lived as a mendicant, meditated in ancient power spots, met hundreds of powerful saints and discussed his research on the information written in the ancient books. Eventually, he began releasing the supreme spiritual knowledge that had been hidden in the manuscripts to the world. In 1993, he settled in a small village in Andhra Pradesh . . . Penukonda. It is where he began building his ashram. He was 20 years old.

It was predicted 400 years ago in one of the manuscripts, The Kalajana, that a divine soul would come and live by the holy mountain in Penukonda at the turn of this century. It was written that this soul would have a special relationship with Mother Divine and through Her grace would spread the knowledge of the supernatural power channels, so that anyone could have a direct experience of the Divine.

Sri Kaleshwar.’s mission is to share this ancient spiritual knowledge with the world. His says these teachings are not his own ideas; they are all based on the information revealed in the manuscripts. He states that eventually it will bring about the end of religious fighting in the world. The information contained in the manuscripts give the formulas and practices whereby any soul can access the Divine and can become a holy soul. He says, .“Every soul has the potential to reach the level of a Shirdi Baba or a Jesus and contribute amazing things to the world. Everybody can do it. That.’s my golden statement. That.’s my mission. Everybody.’s equal. What did Jesus say? Who really trusts in him will become more powerful than him. That means all his students. Everybody.’s equal..” Sri Kaleshwar.’s mission is to create many spiritual masters who will spread this knowledge and bring healing and enlightenment to the world.